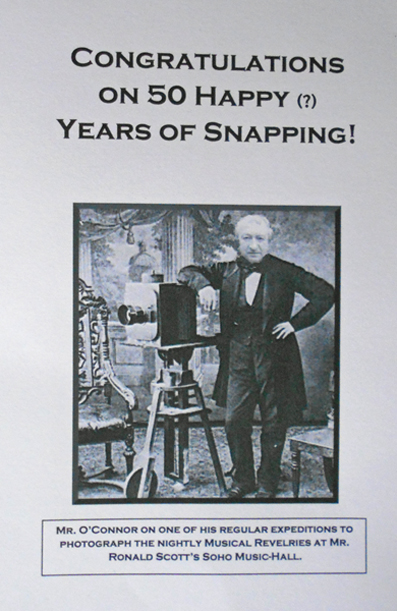 Here we go again. Year 2 of the Covid pandemic coming to a close, with year 3 on the horizon promising us no doubt, more of the same. Who, initially, would have thought that 2020 would have been so dominated by a pandemic. As I mention below, 2020 marked the 50th year of my jazz photography. Considering the problems so many people have had to tackle, the cancellation of an exhibition celebrating this, and the curtailment of live photography, hardly registers at all. Let us hope 2022 will lead to a reclaiming of 'normality'. In the meantime, I wish everyone a happier 2022 than 2021 has been. Take care. Biog. continues.

This site has now been up and running since 2002, the year I retired from productive toil. Nearly 35 years following a career path in the photographic retail trade, that mirrored a game of Snakes and Ladders, (with the snakes being in the ascendance) had finally taken its toll. Retired hurt, physically aged 60, mentally struggling towards 20.

2020 marks 50 years since I first began to photograph jazz gigs. It really does seem as if it's only yesterday. The technical changes have been enormous, from film to digital probably being the the most amazing revolution in image capture ever to take place. Then there is the music itself. The gradual passing of the American giants from the 40's and 50's, the growth of European (and in particular the UK) jazz with their own identities,and the emergence of new talents. At long last the female of the species is also being recognised as having a major influence in the music. Then there are the venues. This disappearance of many small clubs, the tenuous nature of promoting live gigs in general, and the financial woes of all involved. Plus the ongoing 'elephant' in the proverbial room, the almost total lack of interest by the major media outlets (we all know the main culprit). In spite of all this the music continues to survive and therefore hope remains for the future. I shall keep on snapping, if I can remember where I'm going.

I was born in Beckenham, Kent, in 1942. Since 1981 I've lived in Horley, Surrey, with my long suffring wife Judi, a succession of dozy cats, and occasionally our daughter Jacquie. I claim no musical talent, as stated above my working life being mainly in the retail photographic trade.

Why photography? From an early age I'd always been fascinated by the subject, my first 'upmarket' camera being a used Ilford Sportsman costing £6. More than a week's wages! Three shutter speeds, manual focusing, no exposure meter. It cerainly provided the need for good discipline when determining lighting conditions and obtaining the correct exposure.

Why jazz? Hearing Sinatra sing 'That Old Black Magic' in the early fifties started leading me in the right direction. The rhythms and tunes of Latin America also attracted me. Then a certain Stan Getz and Charlie Byrd issued a LP, Jazz Samba. The Bossa Nova. I was hooked and had to find out more. Joining the Sinatra Music Society and meeting Stan Britt, a founder member of the Society, brought it all together. The Society did not just cover Sinatra. Through them, and in particular Stan, I was introduced to the Great American Songbook in all its many forms, Mel Torme, Tony Bennett, Ella Fitzgerald... the list is almost never ending. Plus of course the jazz interpretaions of this vast body of work.

The two hobbies would now blend in to one at the beginning of the seventies.

Stan had become a freelance journalist and began interviewing many of the jazz greats, Dexter Gordon, Milt Jackson, Joe Pass, Count Basie, Andre Previn, the sin of name dropping, must stop! He suggested I join him with the camera. My working conditions were such that I could often avail myself of an extended lunch break, and for nearly 20 years I counted myself blessed at the opportunity to meet so many of my 'heroes'. A lot of treasured memories.

Through Stan I became a regular at Ronnie Scott's. For about 30 years I was there nearly every week, listening and photographing. Thanks to the guys on the door, Monty, Ricci, Moses, Jimmy, Wendy, Katharine, I along with friends, were always assured of prime front seats. They also allowed me to become an 'unofficial' photographer at the club. Pete King and Ronnie mercifully turned the proverbial 'blind eye.' I even managed to photograph Pete in the foyer. No mean achievement.

2016 saw the self publication of my book, Brian O'Connor's images of jazz. A selection of images taken between 1971 and 2016. The biggest difficulty was who to leave out. Errors all around in that respect, but still managed to include over 400 names. I had hoped to make it to 50 years before attempting this task, but finally decided to do it whilst still in almost full possession of my faculties. See my 'Sales' page for a special price deal.


Now, many years into retirement, my hours are spent playing golf, badly, continuing to enjoy and photograph the artists performing my favourite music, and travelling. Yes, I've reached the famous three score and ten and then some.

It never occurred to me that what started out in 1971, photographing Blood, Sweat and Tears at the Odeon Hammersmith would finally 50 years later, end up as a collection of over 2,000 names, hundreds of gigs in various venues, and a home that is virtually a museum of jazz. All a bit of an accident really. My long suffering manager still accommodates my hobbies, and as a special treat I do sometimes take her to a jazz gig. I'm all heart. Our current moggy still doesn't like Archie Shepp! Such is life.

A great thank you to all the musicians, clubs and venues that keep the music alive and have permitted the photos to be taken. They all deserve a medal. To quote from the ancient sayings of a certain Ronnie Scott, 'It's easy to make a million out of jazz. Just start off with two'. The same applies to jazz photography.